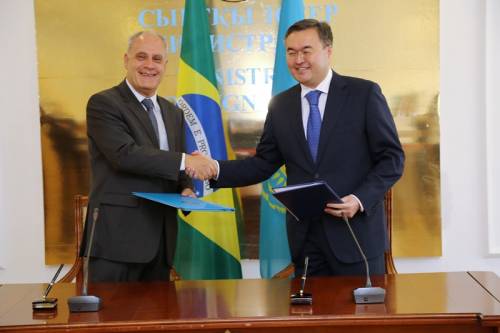 Kazakhstan and Brazil signed an agreement on visa-free regime.

The document was signed by Deputy Minister of Foreign Affairs of Kazakhstan Mukhtar Tleuberdin and Ambassador of Brazil to Kazakhstan Demétrio Bueno Carvalho.

"On the instruction of the Head of State the Ministry of Foreign Affairs of Kazakhstan is constantly working on creation of a greater visa-free regime. Today, we signed an agreement with Brazil on a visa-free regime. The citizens of the two countries do not need visas for staying in the country for 30 days now," M. Tleuberdin said.

The Deputy Minister noted it was going to be the good news for sports fans on the threshold of the Olympic Games starting in 10 days.

"Besides, Brazil is one of the largest countries of Latin American and the entire world. We are successfully developing bilateral relations," M. Tleuberdin noted.

The Deputy Minister noted that the two countries planned to deepen bilateral relations and the signed agreement would help the sides in this sphere. Moreover, the visa-free regime will simplify the process of visiting of the EXPO-2017 in Astana by Brazilian citizens.