Shymbulak mountain skiing resort located not far from Almaty has began experiencing problems because of a big influx of visitors, Tengrinews reports citing the head of the resort Yerzhan Yerkinbayev. 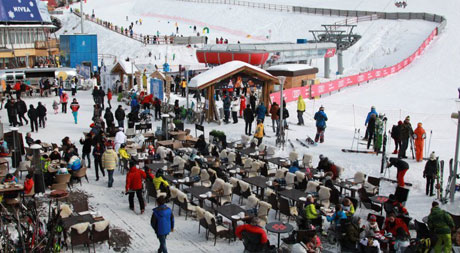 Located in a picturesque clove of Ile Alatau mountains near Almaty, the largest city of Kazakhstan, Shymbulak is now popular among locals and skiers from neighbouring countries for its mild climate, large number of sunny days, long season (from November till May) and magnificent surrounding views.

According to Yerzhan Yerkinbayev, on January 2, right after the New Year, 7,500 people visited Shymbulak in one day. This was a new record for the resort. January 2 is a day off in Kazakhstan so many people could spend a day outside of the city and enjoy the snowy slopes of Shymbulak. "This is not much over the last year's performance, but we observe a persistent growth. We are nearing the maximum capacity of the resort. It affects everything: huge queues, crowds on the slopes," Yerzhan Yerkinbayev explained the problem.

These are not the only problems that the big influx of people create. Large traffic jams have been forming on the road that leads to the resort. Many people have been parking their vehicles along the roadside, hindering the movement of special service vehicles. The resort along with the police had to make arrangements to prohibit parking in inappropriate places.

The prices were also raised to limit the influx of people. "In addition, we have been forced to increase the cost of the ski-pass and cancel benefits on weekends and holidays. We have raised the cost of parking near the slope to 2,000 tenge. This has nothing to do with earning more money. We want to demotivate people from going up here by car. Yet, the parking lot near the slope is still full. There is an idea to close it for private cars altogether and allow parking only for official vehicles, this way people may be able to get used to leaving their cars at the bottom and going up using the gondola cableway," he said.

All this, according to Yerkinbayev, shows that Shymbulak is currently overloaded and close to reaching its maximum capacity. "Shymbulak has geographical limits, there is no opportunity to build new skiing slopes there. Therefore, we openly say that we will benefit if our competitors-colleagues develop faster and new resorts like Kok Zhailau are built. The would have made the existing ski resorts more available. This will give a multiplicative boost to the industry in general. We are unable to accommodate all the people already and Kazakhstan's population is not that large, what is going to happen when more foreign visitors will start coming. Therefore, there is an urgent need now to develop mountain tourism in Almaty region. With the mountains so very close to the city (25 km) - this potential should be used," Yerkinbayev said.

A representative of Kazakhstan's ruling political party Nur Otan, First Deputy Chairman of Almaty's Medeu District Bureau Ghani Maylibayev, supported the idea to continue expending the city's tourism industry. He believes that Kazakhstan needs to build all the necessary infrastructure to boost the development of mountain tourism. According to him, Almaty has the potential to become a city associated with skiing. "According to the global statistics, ski tourism brings six times more profits than beach tourism. If we develop this industry, we can create thousands of jobs. But first we need to create decent conditions for ourselves, and then foreign tourists will come."

Foreign experts from well-known Grandvalira Ski Resort in Andorra, the largest ski resort in the Pyrenees and one of the largest in Europe, are now helping Shymbulak to improve the quality of its services. They also believe that Shymbulak has an excellent opportunity to become a ski resort that will be visited by skiers from all around the world, because it has natural conditions for that.